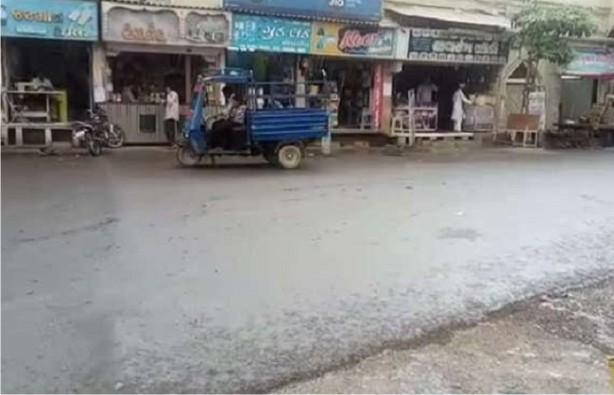 Jamnagar / Ahmedabad Dist. 13: After a cold fall for the last three days, the atmosphere suddenly changed this morning and Saurashtra-Uttar including Halar. Ravipak is facing fears of loss due to overheating in Gujarat, and farmers are facing another setback.

In Jamnagar this morning, a sudden change of atmosphere was witnessed and there was heavy rains amid thunderstorms. Rainfall was raining in many towns in Hallar. This subtropical rainstorm is likely to prove to be another time of trouble for farmers.

At present the harsh cold season of winter had disappeared yesterday and a slight blanket was observed early this morning. In the city of Jamnagar, it was raining amidst changing weather early this morning. Other cities in the district are also getting rains due to rainstorms. The rains in Jamjodhpur diocese were drenched in rains. This poor rainfall has proved to be a concern for farmers. Because his ravi crop is suffering the threat of loss. So, on the eve of the transition, there was disappointment among the kite vendors who witnessed the rainy season.

The rains also rained for ten minutes at 4 am in the early morning hours. As a result, water was receding on the road. So at night the power supply was also lost.

So many villages in Khambhaliya, Bhavanad and Kalyanpur diocese saw heavy cloud cover and rains in the sky around six o'clock this morning. In the cold winter months, people who were exposed to monsoons were put in trouble.

In this diaspora several villages were seen running rain water in several villages. The fears of severe damage to the agricultural crop are being threatened by this poor season. The cumin crop has been suspected of causing severe damage. This time the farmers have been harassed by the rain till last. This has increased the difficulty of the farmers.

Even in the district's Dhol diocese, there have been showers of rains during today's changing weather conditions. Thus throughout the Halar diaspora, the rains, thunderstorms and thunderstorms increased the plight of the people.

Temperatures have dropped below freezing for the past one day, but the weather has changed since this morning. Kutch and Dwarka also receive rains. Earlier, the meteorological department had forecast two days of cosmic rains in the state. On the way to Afghanistan's western district, Rajasthan, which was created in Afghanistan, on Monday expressed the possibility of rain and thunderstorms in Kutch, Saurashtra, North Gujarat, besides Ahmedabad. Then there was light rain in Dwarka and Kutch last night.

The areas including Gandhidham, Anjar, Bhachau and Bhuj of Kutch received heavy rains. Farmers in Rajkot, Jamnagar and Morbi districts of Saurashtra were worried. Botad also witnessed a climate change. Ravi crops have been feared for loss due to mastication. Agricultural crops including cumin, chickpeas, wheat, potatoes are likely to suffer.