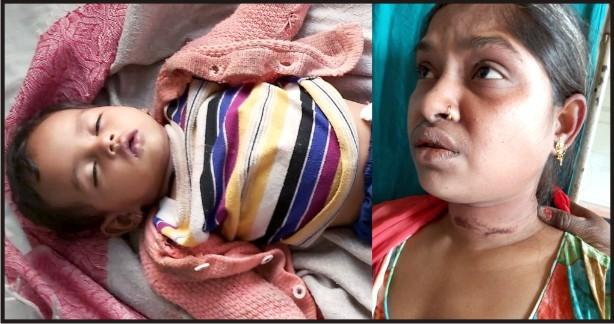 Jamnagar Dt 13: A nine-month-old daughter of a Garcia youth, who lives in Miyatra village in Jamnagar, died yesterday under mysterious circumstances. The baby's mother has been found to be strangulated. Who is being treated. Police have begun investigating the incident while the elderly man died in a bathroom in Rameswarnagar.

The nine-month-old daughter of Aaradh, a nine-month-old girl named Manubha Ranjitsinh Ker, who lives in Miyatra village in Jamnagar taluka, was proposed to move her to the hospital. This baby has died. Police have registered the father's statement and conducted an investigation. Manubha was married a short time ago to Kiranban, the mother of the child. The girl has since died under mysterious circumstances yesterday and, along with her mother, was found strangled in the throat of the house. A detailed investigation has begun by moving to the hospital.

Ganpat Singh Balubha Jadeja (UW), a resident of Shivam Society, located in Rameshwar Nagar, Jamnagar, was at his house on Saturday night when he went to the bathroom for a natural emergency and somehow fell unconscious after being treated for GG. Were transported to the hospital. Where they were found, Jairaj Singh Pethubha Jadeja of Nipijaya declared. Police have taken further action to move the body to PM.